3 Housing Trends to Watch for in 2020
No crystal ball here, just data-based measurements and frontline observations 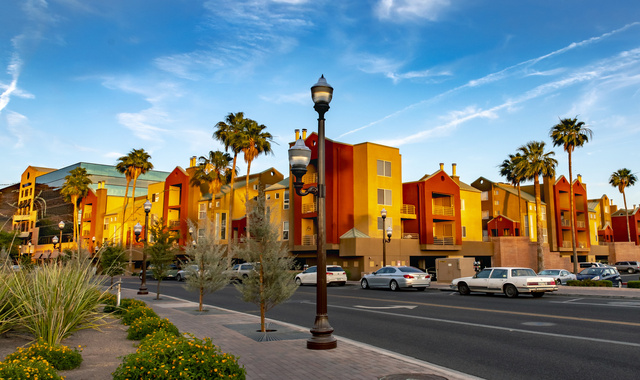 There is no crystal ball for the housing market, but self-directed real estate investors need not rely on magic to recognize and adapt to coming changes.

Because the real estate market is relatively slow-moving — compared to the stock market, for instance — savvy investors can stay prepared for changing market conditions by employing tenets of the tried-and-true scientific method: careful observation, consistent measurement and a willingness to quickly move away from a hypothesis that doesn't survive a real-world test.

Those tenets of the scientific method provide the foundation for these three following housing trends to watch for in 2020:

The S&P CoreLogic Case-Shiller home price index for August 2019 shows that the pace of home price appreciation picked up slightly nationally, from 3.1 percent in July to 3.2 percent in August. But that was not the case in some of the major metro areas included in the index. The home price index for San Francisco was down 0.1 percent from a year ago, while Seattle was up just 0.7 percent, New York was up 0.9 percent, Los Angeles was up 1.0 percent, and Chicago was up 1.4 percent.

"A shift in regional leadership may be underway beneath the headline national index," said Philip Murphy, managing director and global head of index governance at S&P Dow Jones Indices, in a statement included in the release of the August index. Murphy went on to single out Las Vegas as one market with a significant decline in the pace of appreciation — although home prices there were still up from a year ago.

Home price data indicates that while lower mortgage rates in recent months have helped boost faltering appreciation in many parts of the country, home prices are not responding as well in some of the largest U.S. markets — which not coincidentally have some of the highest home prices in the country.

Each major market has a specific story of why price appreciation is weakening, but a common theme is rapidly rising home prices that have strained the limits of affordability, observed Marco Santarelli, owner of Norada Real Estate Investments, a Southern California-based turnkey rental real estate company active in more than 20 markets across the country.

"When you have a market that has very low affordability, you often find that the markets don't work for investors [in hold for-rent opportunities]," he said. "The property values are very high and the rents are just not high enough to make the numbers work. ... The opportunities now are not in your top-tier markets [such as] New York, San Francisco, or Los Angeles."

High-priced, low-affordability markets may still provide good opportunities for fix-and-flip investors, but when price appreciation slows or even goes negative — as it is in some of the major U.S. markets — home flipping can become exponentially more difficult.

While home price appreciation is faltering in some of the nation's most well-known cities, there are other, somewhat lesser known markets continuing to post strong appreciation, according to both the Case Shiller and ATTOM data.

"Phoenix saw an increase in its YOY price change to 6.3 percent and retained its leading position," noted Murphy with the Case-Shiller index. "Meanwhile, the Southeast region included three of the top four cities. Charlotte, Tampa, and Atlanta all recorded solid YOY performance with price changes of 4.5 percent, 4.3 percent, and 4.0 percent, respectively."

"We feel all the growth is in the Southeast," said McNeilage, pointing to the combination of low taxes, high quality schools, and jobs. "The biggest thing is corporate relocations bringing more jobs, and the more jobs, the more housing you need."

The ATTOM data shows a decline in median home prices in Atlanta, counter to the Case-Shiller index, but it does align with the Case-Shiller data for Phoenix, Charlotte and Tampa, showing 4 to 6 percent increases in all three of those cities. Additionally, the ATTOM data shows double-digit home price growth in some Mountain West markets, including Boise (up 13.0 percent), Salt Lake City (up 12.1 percent), and Spokane (up 10.6 percent) along with some Rust Belt markets, including Madison, Wisconsin (up 12.4 percent), St. Louis (up 11.8 percent) and Dayton, Ohio (up 10.6 percent).

"We have bought 12 houses in Dayton in the past year," said Scott Stuber, a Denver, Colorado resident who has been investing in real estate with his husband since 2013. "We've been purchasing properties on Auction.com, private estates, foreclosures. ... What we've been doing is buying properties that are distressed, well under market value ... now we've been more holding and renting."

Stuber said the couple's investment company typically spends around $10,000 to $12,000 on renovations, which can sometimes be more than the property's purchase price. Despite the extensive rehab, Stuber said his company typically rents out the rehabbed homes — two-bed, one-bath "Servicemen Bungalows" — for an affordable $700 to $800 a month.

Trend 3: Another Wave of Distressed Supply

The post-recession pattern in the distressed market has been a steady, long-term decline interrupted periodically by short-term waves of distress that are limited in scope geographically, by loan type, or otherwise. Proprietary foreclosure auction inflow data from Auction.com indicates another wave is building for 2020.

More than 43,000 residential properties nationwide were referred to Auction.com in Q3 2019 for a potential future foreclosure auction, up from the previous quarter and a year ago to the highest level since Q1 2017. 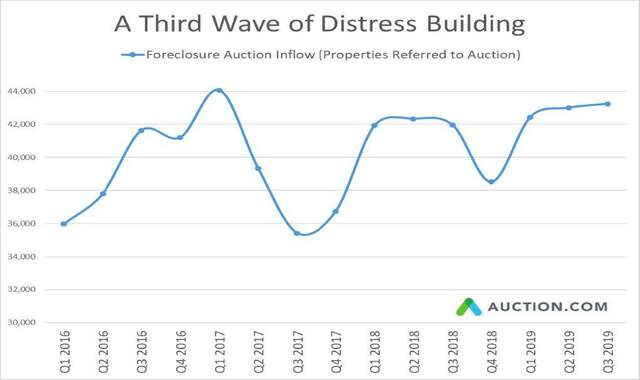 The increase in inflow foreshadows an increase in completed foreclosures in the next six months.

The emerging wave of distress indicated by this data is concentrated in housing markets with rapid home price appreciation in recent years, and tied largely to government-insured and private portfolio loans.

The Q3 data shows a 1-percent increase in the inflow of government-insured loans, including those insured by the Federal Housing Administration (FHA), Veterans Administration (VA), and U.S. Department of Agriculture (USDA).

Many of the aforementioned markets have been rock stars in the housing boom of the last seven years, but the building wave of distress in these markets shows that they are at risk of soon becoming former real estate rock stars.

Looking further into 2020, the much anticipated presidential election late in the year is a wildcard that could impact many facets of the economy and housing market, including distressed housing. It would take a crystal ball to predict the outcome and ripple effects of the election, so any further analysis of that can be left to those more magically inclined.

However, the other trends identified above — weakness in major markets, strength in secondary markets, and an emerging wave of distressed supply - are grounded in more careful observation and measurement of data, along with insights from investors who are constantly testing their investment hypotheses on the frontlines of the real estate market. 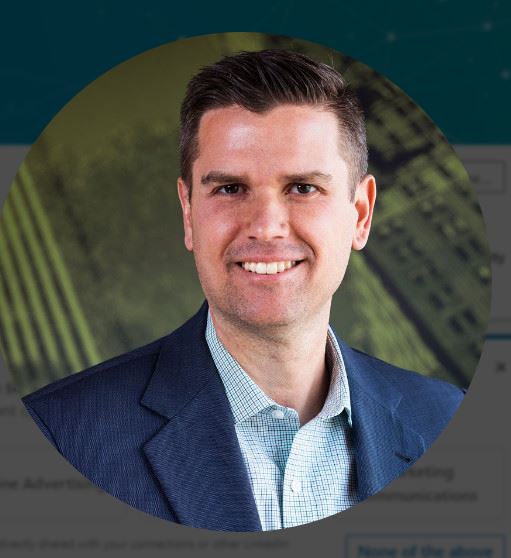 Daren Blomquist serves as vice president of market economics at Auction.com. Find more of his insights on the Auction.com blog or email him at [email protected]